Dash Deluxe 6-Quart Electric Air Fryer
Despite having a lower overall score then the Air-Crisp Pro, our favorite Dash Air Fryer is the 6-Quart Deluxe. The lower rating is a result of having no real features to talk about; however, that is part of the appeal.

It has the appearance of a product that comes from a simpler time, and it lives up to that period. It comes equipped with two primary temperature and time dials (that tick when cooking and ping when they’re finished), and that is it. So simple it’s genius.

It looks fantastic and performs as you would expect. 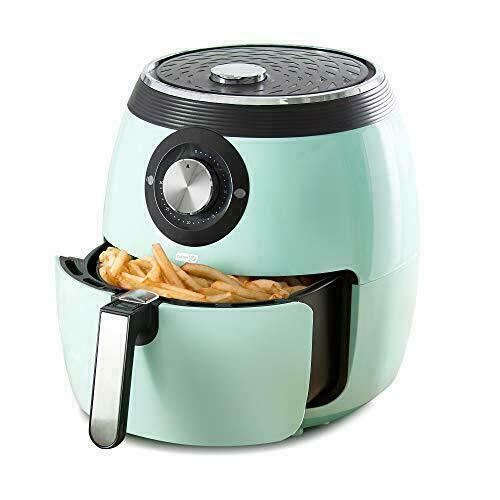 The Dash Tasti-Crisp is a small entry-level air fryer oven and is one of the most basic appliances on the market. It has a low 2.6-quart cooking capacity, which is suitable for one to two people.

However, there is an individual style in its simplicity, and it has a 50s feel that is popular amongst consumers.

It is available in four different colors.

There isn’t much to this air fryer, and Dash has somehow harnessed that simplicity and worked it into an incredibly stylish appliance. It has a 1950s vibe, especially the aqua-colored unit. It is available in aqua, black, grey, and white.

The temperature and time dials are simple, analog, fittings that only further enhance that mid-twentieth century feel.

The Tasti-Crisp has a small 2.6-quart cooking capacity, which puts it on the bottom ring of air fryers in terms of size. However, there is a market for small air fryers as people who live alone or students on a tighter budget have little need for a large appliance.

Auto Shut-Off: Unlike a conventional oven, this air fryer will shut-off automatically when it gets to the end of the cooking cycle.

Cool-Touch Housing: The manufacturers of this appliance claim that cool-touch housing is so effective at keeping the heat inside that even small children can use the air fryer without ever being in danger.

Dishwasher Safe: The basket and grid can be cleaned in the dishwasher, making it much easier to get rid of the grease and grime compared to trying to handwash the basket.

Yes, the basket and grid are dishwasher safe, but that’s only a bonus if the consumer has a dishwasher. When the user is forced to clean the appliance by hand, the non-stick coating does not live up to its name, and it can be tricky to remove the engrained food.

Customer reviews repeatedly point out that the appliance dials also tend to lose their numbers after repeated use, leaving users to estimate the time on the dial.

Should you buy the Dash Tasti-Crisp 2.6-Quart Air Fryer?

While the style and simplicity of this Dash model are very appealing and fill specific gaps in the market, the small basket size, the complete lack of features, and issues with the performance put a severe doubt in our minds about whether this air fryer is worth the money.

This model is named the “Deluxe,” but the simplicity of this air fryer is what makes it brilliant. The ease of use is beyond comparison, and like the smaller Tasti-Crisp, it feels like it came right from a 50s kitchen. Right down to the ticking timer and the “ting” that lets you know the food is ready.

Large enough to feed a family of four, simple enough that almost anyone can use it.

It is available in four different colors.

Much like the Tasti-Crisp, this Dash appliance harks back to a simpler time. However, as the Dash Deluxe is a more expensive product, it has a much more high-end look.

The cheap plastic dials were replaced with stainless steel ones, and there’s a lovely silver handle and silver trim around the top just which gives it that extra something.

This model is available aqua, red, black, or white.

The 6-quart basket is a significant improvement over its younger siblings’ 2.6-quart capacity. However, it has a round basket, which is highly inefficient compared to a rectangular design.

This appliance is well equipped to deal with most demands from a family of four.

Dishwasher Safe: This Dash Deluxe is so basic that being dishwasher safe is the closest thing this appliance has to a feature. The basket and grid can both be cleaned in the dishwasher, making it much easier to get rid of the grease and grime compared to trying to handwash the basket.

The simplicity of this air fryer enabled the focus of the design to be shifted towards performance, and Dash’s customers are delighted with the end product of the 6-Quart Deluxe.

89% of consumers rate this appliance between four and five stars while the number of objections for mechanical failure is minimal.

The non-stick coating is marginally better than it is on the Tasti-Crisp, with fewer complaints regarding food sticking to the basket. However, one cause for concern is a small number of users struggling with that non-stick coating peeling off after repeated use.

Should you buy the Dash Deluxe 6-Quart Air Fryer?

Despite registering a relatively low score in our review, we do recommend this product. The Dash Deluxe review score was the victim of having few features (if we’re being honest, it had no features, but we felt the need to write something in that segment), but that is not always a bad thing.

Some consumers prefer their technology simple and easy to use, and with the fantastically beautiful Deluxe model, you get just that.

The Dash Air-Crisp Pro has a relatively high price point for such a small 3-quart cooking capacity. It performs superbly, yet the features are few for a model that is marketed as a more modern appliance than the other air fryers made by Dash.

It comes with eight temperature/time presets to help produce deliciously healthy meals, and is available in three different colors.

While the other Dash air fryers we’ve reviewed have an appearance that wouldn’t look out of place in an American diner, the Air-Crisp Pro Digital brings their appliances back into the 21st century.

The LCD sits on top of the air fryer with a fantastically contemporary design. However, the unit’s main body looks more like a cookie jar than it does a small kitchen appliance.

It is available in aqua, red or black.

For a mid-range price point, the 3-quart basket is a little on the small side. It’s only suitable for cooking meals for one or two people.

This appliances footprint is rather large. Its outward measurements are only slightly smaller than those of the Deluxe model, yet the Air-Crisp Pro has half the cooking capacity.

Auto-Off: The Air-Crisp Pro will automatically shut off when the timer reaches zero to prevent overcooking its contents.

Dishwasher Safe: This air fryer’s basket is safe to put in the dishwasher for ease of cleaning.

Once again, Dash has done a fantastic job building an appliance that performs to the best of its ability. Consumers are delighted with the foods that this air fryer consistently produces.

The overall build quality is pretty good, though a couple of customers complain the safety button cover tends to break easily.

Cleaning is made easy by being dishwasher safe, and even if your user doesn’t have a dishwasher, it’s still relatively easy to remove the grease and grime using a non-abrasive sponge and hot water. There are only a minimal number of reviews that mention the chipping away of the protective coating.

This is the only digital air fryer made by Dash on our review, and it’s seemingly that digitization that has driven up the price of this appliance. It has a small cooking capacity considering its mid-range price point, and its simplicity appears to be at odds with the overall aesthetic.

It has a higher review score than the Deluxe thanks to the cooking presets, and the Deluxe’s lack of features, but paradoxically, we wouldn’t choose this air fryer.