Food Processor vs Blender: which is more versatile?

The general rule of thumb is, if your recipe is more of a liquid, then a blender is the best tool for the job, while a more solid concoction will require a food processor to get the best results.

If the ability to make smoothies, shakes and other drinks is non-negotiable, you need to buy a blender. You won’t be able to make a good smoothie in a food processor. But if you need an appliance that will help you with baking, chopping, and shredding, then a food processor is the clear option.

If that’s sufficient information to help you choose which appliance is right for you, go ahead and skip to the end of the article for our recommendations of the best value food processors and best blenders, and an option that could be the best of both worlds.

If you need more help to make your decision, read on.

Which Appliance For Which Recipe?

Food processors and blenders are designed for specific purposes, but there is some crossover between appliances. Choosing between these two appliances depends entirely on what kitchen tasks you need help with. We’re going to look at some recipes and which device will do the best job for each one. 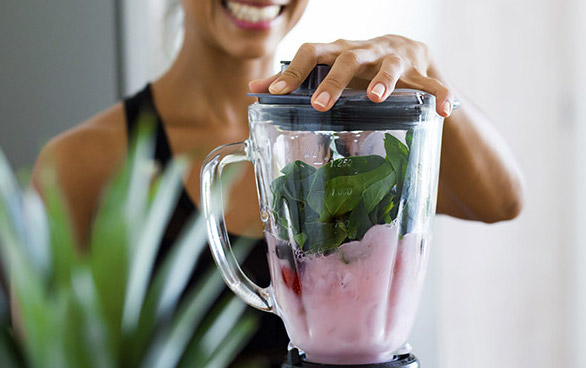 By their very definition, smoothies are supposed to be smooth. The high-powered motor and blunt blades of a blender will pulverize the ingredients to produce silky-smooth smoothies. Food processors cannot mix large quantities of liquid without making a mess, so this is a non-starter. Check our lists of best blenders for smoothies and protein shakes.

As Purées don’t take a considerable amount of liquid to produce, so it’s possible to make them in either a food processor or a blender. You’re essentially reducing the ingredients to paste, so you should be fine using either a blender or food processor.

Food processors are very capable of mixing dough thanks to a special dough blade assembly. Though not all food processors come equipped with dough blades, some brands sell them as accessories; others don’t have them at all. Making dough in a blender would be challenging, and the results wouldn’t be great.

Blender jars and blades are purposefully designed to process large quantities of liquids without making a mess, so they’re ideal for making soup. Some blenders can warm the soup while blending the ingredients using friction from the high-speed blades. You can produce small amounts of soup in a food processor, though you’ll make a lot of mess, and the results won’t be anywhere near as good as with a blender. It probably isn’t worth the fuss.

While both appliances can produce good salsa, your personal salsa preferences will dictate which device you’ll use. A blender will give you a silky-smooth salsa, while a food processor will produce a nice chunky dip instead.

Most (not all) counter-top food processors come with shredding and slicing capabilities, which can quickly shred entire blocks of cheese or slice your fruits and veggies for salads. It’s not possible to perform either of these functions with a blender.

It’s worth noting that very few food processors can make French fries. So if you’re only trying to decide between a food processor or a blender, this function might not matter to you much. However, the Breville BFP800XL Food Processor can reduce full potatoes to their French fry state in seconds, making food prep incredibly efficient.

The most popular blender styles are the single-serve/personal blender, immersion/hand blender, and the traditional counter-top blender. While food processors generally come as large, versatile counter-top units or as a small yet convenient chopper.

Counter-top blenders and counter-top food processors are similar in appearance, size, and in some cases, power, so it’s these two appliance genres we’re going to look at today. Specifically, the Vitamix A3500 Ascent Series Blender and the Breville BFP800XL Sous Chef 16-Cup Food Processor.

Vitamix and Breville are the best in the small kitchen appliance business, and these devices, in particular, represent the very best in their respective fields. They give you some indication as to just how useful these tools can be. 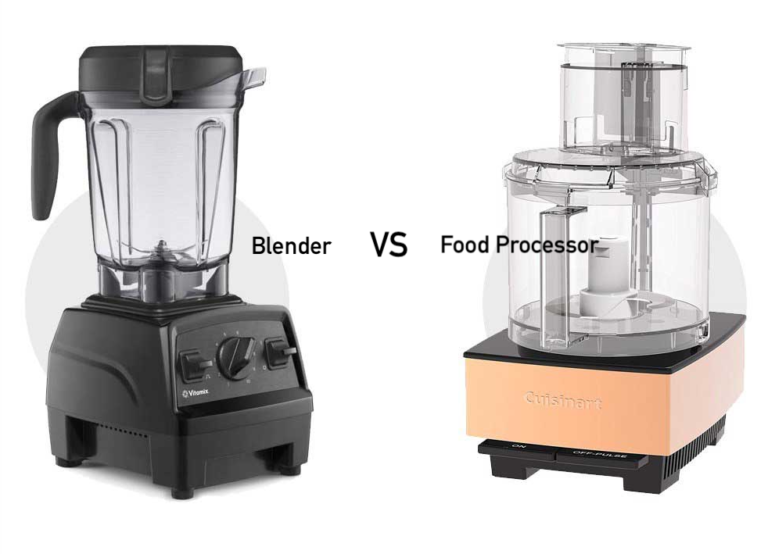 The container found on the Breville BFP800XL (and on all food processors) is called a ‘Work Bowl.’ The bowl is wider and has less height than a blender jar, to help the ingredients spread out during processing and avoids over-chopping to maintain a nice chunky texture.

While the jar that comes with the Vitamix A3500 blender is a cone-type shape specifically designed to create a vortex when in the blades are motion, that pulls the ingredients continuously towards the middle of the jar so the blades can work their magic and create smooth drinks and soups.

A standard food processor will usually come with a set of very sharp blades. An S-Blade for chopping, and a disc (or two) that will shred and slice ingredients. These are interchangeable within the work bowl for maximum versatility.

The Breville BFP800XL Sous Chef 16-Cup Food Processor is a costly appliance and, as such, comes with a vast array of attachments that can accomplish most kitchen tasks.

Typically, a counter-top blender will come with just one blade set, which is blunt and fixed to the jar’s bottom. Rotating at high speed, the blades help create the previously mentioned vortex and, ultimately, a silky-smooth blend.

The power differential between motor-bases for food processors and blenders is neither a positive nor negative. A food processor aims not to obliterate the ingredients but to chop, slice or shred. Breville installed a 1200w motor in the BFP800XL, which is one of the most powerful food processors you can buy.

While a blender has a high-powered motor and blunt blades to smash the ingredients down to a molecular level, which is preferable in a smoothie, soup, or cocktail. The Vitamix A3500 comes with a ten-speed 1350w motor, not the most powerful blender on the market, but still a higher wattage than any food processor you’re likely to find.

With eight different blades and discs, the Breville BFP800XL Sous Chef 16-Cup Food Processor has more blades and attachments than any other processor on the market. Check the full list of Breville food processors.

Many food processors also come with a ‘feeding tube’ so ingredients can be added to the work bowl without removing the lid or even turning the appliance off. The extra-wide tube on the Breville allows you to add whole fruits and vegetables without the need to chop them down to size. This is not a luxury that’s available on a blender.

While food processors generally come with many attachments, blades, and discs, they can be hamstrung by little to no variation in speed options.

The A3500 doesn’t come with any attachments, but its versatility is found in the 10-speed motor that you can use to vary texture and consistency. There are also five pre-set programs (Smoothies, Frozen Desserts, Hot Soup, Dips and Spreads, and Self-Cleaning) to remove the guesswork from various recipes.

A specially designed tamper allows you to ease more stubborn ingredients towards the blades without stopping the appliance or damaging the temper.

Side note: There is an attachment available for the Vitamix A3500 (and all Vitamix Ascent and Venturist models) that transforms your blender into a 12-cup food processor. The package comes with a work bowl, feed tube, food pushers, chopping blade, and two reversible slicing/shredding discs. Be warned, though, the attachment costs more than some complete food processors, adding to an already enormous price point for the Vitamix A3550.

Most small kitchen appliances are made of dishwasher safe materials to make the cleanup process a cinch. However, if you don’t have a dishwasher, you’ll have to wash them by hand. Blenders have the advantage of being able to handle large quantities of liquids, so adding a little dish soap and warm water then giving it a few pulses makes them far easier to clean.

The two appliances we’ve looked at are the best examples of food processors and blenders. If you have the disposable income to buy these products, then go for it. You’ll get years of high-quality service out of them. But they are very costly.

Here we’ll look at a couple of more affordable appliances and some options that offer the best of both worlds.

At half the Breville BFP800XL Sous Chef price, the Cuisinart DFP-14BCWNY is a superb alternative food processor. It’s got a substantial work bowl, is super simple to use, and offers chopping, shredding, and slicing blades. Unfortunately, there is no dough blade.

Ninja has produced a very capable large capacity blender with the BL660. The 72oz jar can hold large quantities and has a three-speed 1000w motor that can handle most jobs. Despite that Ninja produces one of the best value blenders overall, Ninja BL660 Professional is around four times cheaper than the Vitamix A3500 Ascent Series Blender.

If you’re still unsure whether you want a food processor or blender, Ninja might have the solution. The Mega Kitchen System has both blending and food processing capabilities. With a 72oz blending jar, a 64oz work bowl, a chopping blade, a dough blade, and two ‘to go’ cups, this is one of the most versatile appliances on the market at a super affordable price point.

However, it doesn’t come with slicing and shredding discs, meaning you won’t have the full range of food processing abilities. 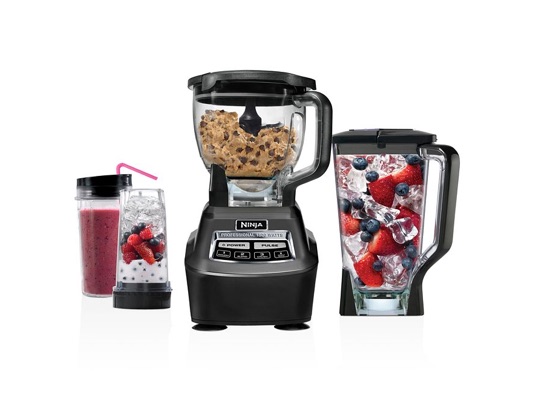